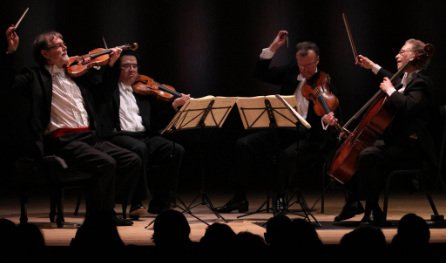 Our opening concert this year is given by the world-renowned Endellion Quartet, arguably the finest and most experienced string quartet playing in Britain today.

Currently celebrating their 40th anniversary year, the Endellion String Quartet has appeared at all the major concert series and festivals throughout the UK, including the BBC Proms, and has broadcast countless times on BBC radio and television.

The quartet’s international schedule has included tours of North and South America and concerts in Australasia, the Far East, Middle East, South Africa and Western Europe. Its presence in London has been marked for many years by an annual series at Wigmore Hall and also by appearances at the Queen Elizabeth Hall.

Don’t miss this opportunity to hear for yourself  ‘the trust and risk-taking that comes from years of playing together . . .  a true delight.’
(The Strad Magazine following a Beethoven Cycle at New York’s Metropolitan Museum of Art).

Other recent and future highlights include appearances at Carnegie Hall in New York, Queen Elizabeth Hall in London, Amsterdam’s Concertgebouw, Zentrum Paul Klee in Bern, Ittingen Festival, Montreal’s Pollack Hall, a tour of Mexico including a performance at the Festival Internacional Cervantino, a fortnight of concerts and teaching in China and Taiwan, the Endellion’s first concert in Tchaikovsky Hall, Moscow, débuts in Ankara and Istanbul, and a return to Prague.