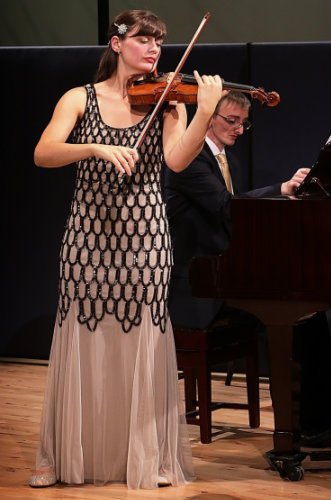 Mozart Sonata in E minor
Brahms Violin Sonata no 2 in A major op 100
Korngold 4 Pieces from Much Ado about Nothing
Kreisler Selection, including Love’s Sorrow and Love’s Joy
Tchaikovsky Valse-Scherzo

Festival Favourite Sophie Rosa returns this year with two celebrated Sonatas and a selection of charming Viennese gems by legendary Austrian violinist Fritz Kreisler, with our Artistic Director Duncan Glenday at the piano; and ends with Tchaikovsky in playful, ebullient mood – a taste of what to expect on our Final Night.

Sophie Rosa first garnered attention after winning the Second Prize and Audience Prize at the 2nd Manchester International Violin Competition 2011. She has performed across the UK as a recitalist in venues including the Royal Festival Hall, the Purcell Room, Wigmore Hall and Bridgewater Hall and has appeared as soloist with the Royal Liverpool Philharmonic Orchestra and Manchester Camerata. Sophie has broadcast for BBC Radio 3 and has released CDs on Champs Hill and EM Records labels to critical acclaim.

Uppermill Summer Music Festival’s Director, Duncan Glenday enjoys a busy and varied performing career as a concert pianist, concerto soloist, chamber musician and teacher. Since completing his studies at the Royal Northern College of Music, he has performed over 300 concerts throughout the UK, including appearing at venues such as: St James’ Piccadilly, London; the Bridgewater Hall, Manchester; the Sheldonian Theatre, Oxford; Hutcheson’s Hall, Glasgow; and at the Lowry, Salford Quays with the Northern Chamber Orchestra. He has appeared at Festivals including the International Lake District Summer Music Festival, the Ryedale and Isle of Wight Festivals whilst in 2010 he gave a solo recital for the inaugural Geneva International Academy and Festival.

As an accompanist, Duncan collaborates regularly with singers including mezzo Kathryn Rudge (a former BBC New Generation Artist), soprano Katherine Broderick (winner of the 2007 Kathleen Ferrier Award), and David Kempster (“Britain’s best baritone”). He also enjoys a successful ongoing duo partnership with violinist Sophie Rosa, with whom he is currently performing a cycle of the complete Beethoven Violin Sonatas.